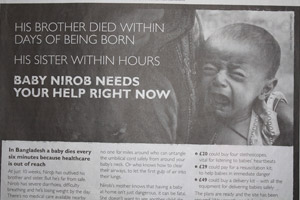 Audience research is vital for organisations that want to know how people respond to their messaging. I wanted to do some audience research to find out how people really respond to images of suffering children. Do they feel any empathy for the child in the picture? Do they identify with their suffering or feel any responsibility for helping in the fight to overcome poverty?

So I organised some focus groups and asked groups of people from a wide range of ages and backgrounds to look at a fundraising advert featuring an emaciated baby and tell me their responses.

The groups very quickly expressed near-unanimous sensations of pity and guilt, with many of them feeling that only a very hard-hearted person could fail to be moved. Respondents understood that the advert had been deliberately constructed to make them feel personally involved. As a young adult in London observed: “The whole body, head and everything. It’s malnourished. The message is the baby’s going to die unless you help.”

Everyone knew if they gave a donation it wouldn’t actually go to the child in the picture and felt it was a manipulation. “. . . I mean the advert is asking you to help them: the country,” said a student. One of the Worcestershire participants was more cynical: ‘So the likelihood of actually, that child there, that’s sitting there directly, that you want to give money to, that it would end up [even] with an equivalent child is highly unlikely.”

What caught me by surprise was how quickly the mood in every group changed to resentment about the perceived distortion, which made them feel the advert was trying to manipulate them. “They’re trying to make you feel guilty and it works,” said a London student.

All the groups who participated in my audience research raised questions about whether the advert was truthful. One of the London students observed: “Everything about that advert is completely constructed. And everyone knows it.” And a nurse from London commented: “Everything’s governed by someone wanting to paint a picture. . . and everything is designed to make us think in a certain way because everything’s filtered.”

A middle-aged male Londoner summed up his resentment: “It looks accusational. It seems to be accusing everyone. Me. You. Why aren’t you doing anything for that baby? Ultimately they want you to reach into your pocket.”

Finally, it emerged that people’s emotional engagement was shallow and transient. As a woman in the Worcestershire group put it: “There is an element of it being so distant that somehow people in those circumstances seem less human to you because it’s so far away and so impossible to relate to.”

Charity marketing experts know that adverts showing emotive images get a generous response.And images of children are widely-used by global development charities because few people remain unmoved when they see an image of a child in need.

But my audience research found that they seem to be having some unwelcome side-effects on the public: reinforcing people’s feelings of alienation from the Global South instead of strengthening their engagement, and making people feel resentment about the perceived emotional blackmail instead of experiencing genuine feelings of empathy.