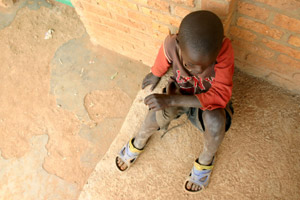 It’s easy to be jaded about jamborees like the World Humanitarian Summit but in all the verbiage of ‘Grand Bargains’, aid financing and the like which came out of Istanbul this month, I was struck by one hopeful little nugget. In a ‘Charter for Change: Localisation of Humanitarian Aid’ initiated by CAFOD and Christian Aid, a whole slew of international ngos at the summit were committing themselves inter alia “to promote the role of local actors to the media and the public” www.charter4change.org

The date for charter implementation is May 2018. And not a month too soon. We have been down this track before, to be precise in the wake of the Ethiopian famine of the 1980s. Back in 1989 I wrote a rather controversial piece, ‘Pretty as a Picture’, for the New Internationalist magazine. I laid into the widespread use by humanitarian agencies of fundraising imagery that presented a passive developing world as the recipient of cheap-and-easy outside intervention. The indispensable role of local people and local organisations was almost always written out of the charity advertisers’ script.

But the tide seemed to turn in 1992 when international ngos signed up to a Red Cross Code of Conduct in Disaster Relief. Article 10 of the Code stated: “In our information, publicity and advertising activities, we shall recognize disaster victims as dignified human beings”. At the time I certainly saw the new code as a real breakthrough: agencies had recognised that people should have dignity in media portrayal.

However, as I explain in a chapter in Glenda Cooper’s book, Humanitarianism, Communications and Change [Peter Lang, 2015], this has proved a very naïve view. There is no effective monitoring of such codes, so the Red Cross rules were increasingly ignored and failed to survive the financial pressures of the noughties. Income maximisation became the goal and principled scruples about messages and imagery were buried.

Sophisticated agencies, such as Save the Children Fund and Concern Worldwide who know better than most about the realities of development, have been reduced to putting out advertisements with reductive and misleading messages. These are the very same messages I objected to in the original New International piece – intervening by outside agencies is cheap and easy, little or no reference is made to the causes of suffering and local partners are edited out of the story. Yet I know from my own field experience that Save the Children and Concern are at their most effective when working with local or national organisations and community groups.

So if the new Charter for Change is to change anything, two things have to happen. One is for a new burst of creativity over popular messaging which will need principled humanitarian figures to sit down with their creatives and brainstorm new messages and images in line with the charter. And the other is for the trustees of international ngos to hold their fundraisers and communications staff to a much stricter account.